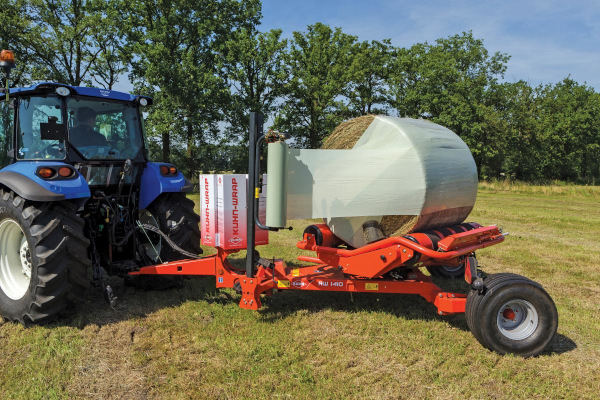 Your feed dollars count. Protect your bottom line by preserving the feed quality at its optimum potential, with KUHN wrappers. Available in 3-point mounted and trailed configurations, these models can handle round bales up to 2,200 pounds and 4x5 in size.

The KUHN RW 1110 is a 3-point mounted, quick-hitch compatible model ideal for “wrap and stack” operations in the field or in the yard. Wrapping at the storage site means less risk of film damage and can be done by a one-man operation. The KUHN RW 1410 and 1610 are trailed, self-loading wrappers offering greater versatility. The RW 1410 will lift bales up to 5’ in diameter and 2,200 pounds, while the professional RW 1610 is capable of loading the heaviest bales up to 2,645 pounds. - Less

Your feed dollars count. Protect your bottom line by preserving the feed quality at its optimum potential, with KUHN wrappers. Available in 3-point mounted and trailed configurations, these models can handle round bales up to 2,200 pounds and 4x5 in size.

Wrap round bales quickly and re... + Read More

The KUHN round bale turntable wrappers are equipped with two rollers and four wide-spaced belts. This design provides a deep and stable cradle for the bale on the wrapping turntable. The two large bale support rollers provide more stability and guidance. The four wide-spaced belts provide maximum traction and even rotation for the bale. Even bale rotation is vital to ensure the optimal film overlap for conservation and crop quality during storage.

Besides a standard single stretch, KUHN introduces the all-new RW 10 series with patented* e-Twin system for excellent, cost efficient, fast wrapping. The innovative e-Twin technology enables wrapping via a unique combined pre-stretcher design with patented film distribution to save 50% on wrapping time and further film savings. The conical pre-stretch rollers have been positioned in such a way that the two 30" (750 mm) film wraps with 2/3 overlap are glued together providing a double layer before they leave the pre-stretcher unit. Optional on some of the wrappers is the auto film layer correct kit. The correct kit detects an empty or torn film roll and adjusts the required amount of table rotations to cover the bale with the required amount of layers.

- Extreme tear resistance under all circumstances

- Available on manual and computer version with joystick

Once the desired number of film layers have been applied, the film is then held firmly and cut. A spring-loaded or hydraulic high-grip film cutter holds and cuts the film automatically without the need for extra controls. The hydraulic high-grip film cutter, on the RW 1410 & RW 1610, allows you to adjust the cutting moment independent of the table tipping position, resulting in the shortest possible end string. It has a long stroke to help accommodate various bale lengths, and ensures a firm hold and a clean cut of the film in various weather conditions.

The KUHN trailed wrappers features a unique low-profile design ideal for stability when loading, wrapping or unloading a bale. The rear axle position results in a low table height eliminating the need for an active fall damper. There is constant weight transfer to the tractor that prevents up-and-down movements of the drawbar and prevents tractor wheel slippage when driving uphill with a bale on the table or loading arm. The bale can be dropped on the go for maximum output!

The low mounted table, on the mounted RW 1110, ensures a gentle bale discharge so there is no need for a fall damper. The low mounted height also allows easy replacement of the film rolls.

The computer-controlled version (C) uses a control box that provides all the information and features for a fully automatic wrapping process. The integrated joystick automatically steers bale discharge, among other direct functions.

The RW 1110 Computer version (C), with standard RF remote control, can be operated from a loader while using a power pack or second tractor for the oil- and power supply. This creates a one-man operation for loading, wrapping and stacking. The C version is standard fitted with automatic stop at the end of film/film tear, integrated bale and wrap counter, play/pause function and 90° loading position.

The computer controlled version (C) on the RW 1410 uses a monitor, with an integrated joystick, that provides all the information and possibilities for automatic operation of the entire wrapping process. Automatic stop at the end of the film/film tear comes standard. The enhanced RW 1610 Computer controlled version (C), with integrated patented AutoLoad function, has increased overall efficiency and loading and wrapping capacity. The RF remote control with high distance safety control is optional.